No stranger to a crisis: Masons of Yorkshire draws strength from distillery fire experience to face Covid-19 challenge

The Covid-19 outbreak and subsequent lockdown restrictions have challenged every distiller, with on-trade sales shutting down overnight and deliveries presenting logistical challenges. Couple this with the ongoing impact of Brexit and it seems no-one could have prepared for the hardships of 2020.

However, having suffered a major distillery fire that destroyed its premises only two years ago and bounced back to an even greater level of success, Masons of Yorkshire understands the importance of hiring passionate people and uniting with the gin community to persevere through a crisis.

Masons has been dubbed ‘Yorkshire’s first gin’ since its birth in 2013, being the first gin distiller to represent the county’s long association with quality food and drink. Founders Karl and Cathy Mason, however, wanted the world to know they have even more to offer.

“Yorkshire is quite a marketable county when it comes to food and drink, but we never wanted it to hold us back. We started referring to ourselves as ‘the world’s favourite Yorkshire gin’ to highlight our global ambitions but also our strong links with Yorkshire.”

Indeed, Karl is something of a global encyclopaedia when it comes to gin, having run a Facebook page with 30,000 followers before Masons where he reviewed gins sent to him from around the world.

He said: “Distillers used to send me a wide variety of gins to review, and one day I thought ‘We can do this!’”

Masons’ honest and straight-talking attitude is a major appeal for its consumer base, which is reflected in the way the business sets out to make its world-famous gins.

Karl described: “There’s no smoke and mirrors here. We simply do everything in the best way we can for taste and quality, never for speed or low cost.”

Masons uses a single-shot distilling process with a London Dry method for its gins, including botanicals from Yorkshire and beyond. Karl continued: “We’re very critical of ourselves and scrutinise every step in the distilling process to get the best possible flavour out of our gins. This means we do things very, very slowly to get it right.”

Masons’ meticulous attention to detail paid off when it released its first gin, The Original, which went on to earn several accolades including the Great Taste Award 2017, Gold at the World Gin Awards 2018 and 2020 and Gold at The Spirits Business Awards 2020.

The early success of The Original allowed Karl and Cathy to move away from small scale production through outsourced distillers and open their own premises in their home town of Bedale. Karl said: “We always wanted to open a distillery in our hometown. Cathy used to work at the local school and has lived here her entire life.” 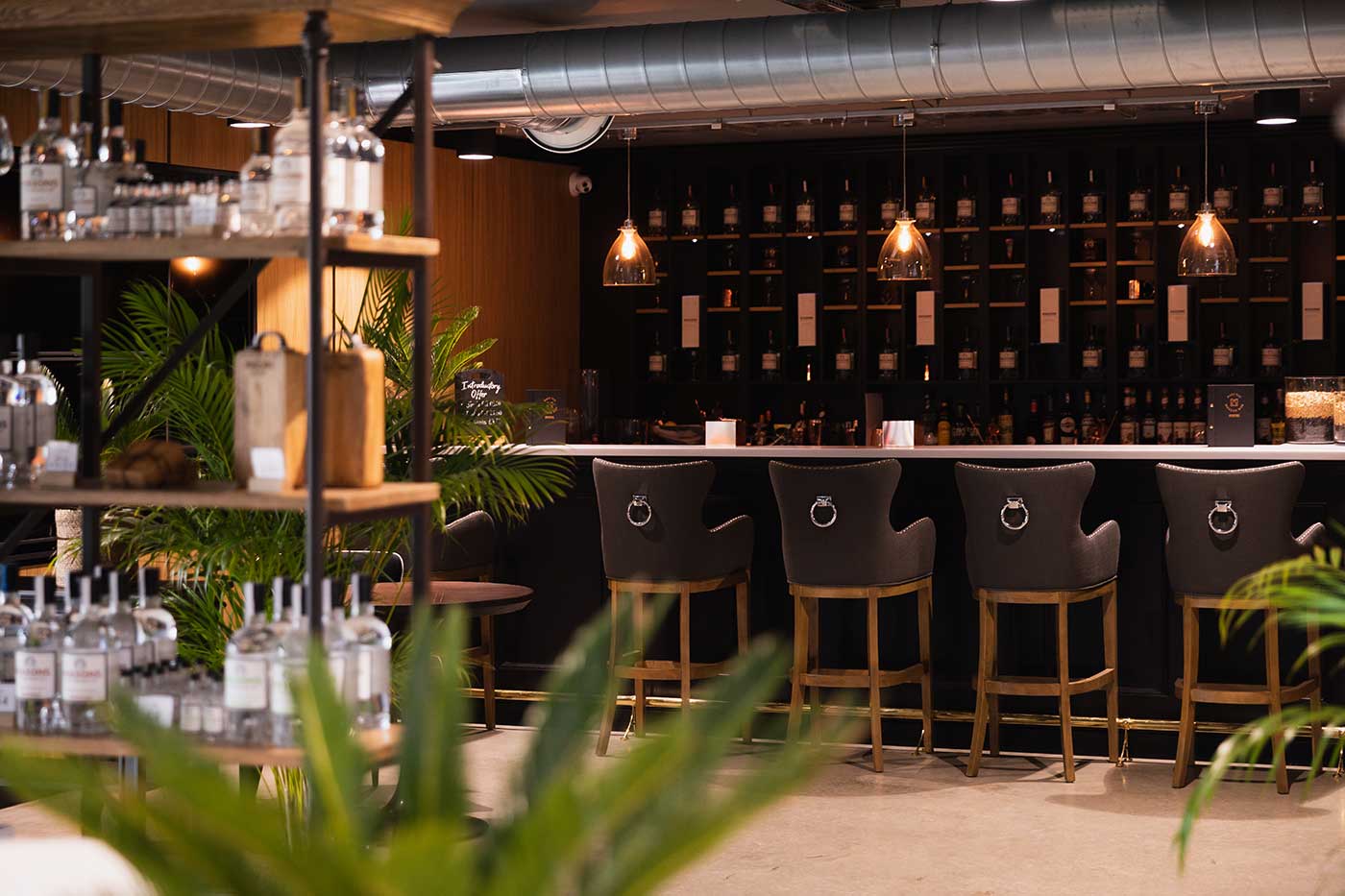 The couple’s reputation within the community allowed them to recruit dedicated and passionate staff, who would prove vital to the brand’s survival when fire broke out in 2019 and destroyed the distillery.

Karl recalled: “A large 26-pallet order was waiting in our warehouse to be collected and this and everything was lost in the distillery fire, leaving us with absolutely nothing.

“Even things taken for granted, like stationery and laptops, were gone. We were just relieved the alarm was raised and everyone on site was able to escape.”

The next morning Karl and Cathy were contemplating the company’s future when they heard a knock at their door at home. Karl explained: “Our staff appeared with a big whiteboard, marched into the dining room, asked ‘So where shall we put this down?’ and we got straight to work on rebuilding our success.

“Everyone forgot their regular jobs and helped out wherever they could, which included securing offices to work from and communicating with consumers. They were amazing.”

Masons returned to outsourced distilling and, as news about the fire circulated, they became inundated with support from distillers and consumers across the country. Karl said: “From the far reaches of Scotland right down to Cornwall, we were overwhelmed with supplies and equipment to help us get back on our feet. We even ran out of space to store everything.” 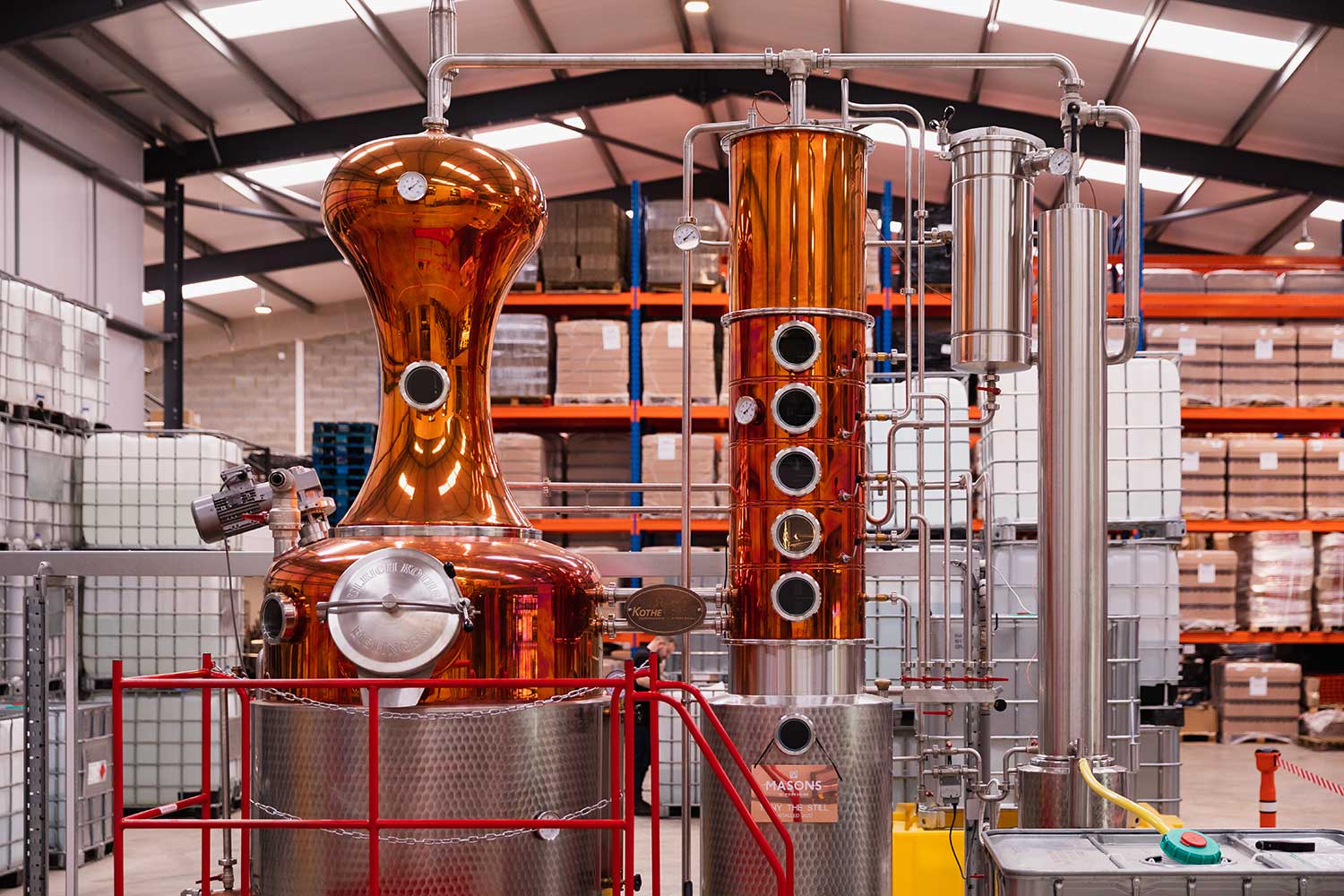 With all their packaging and bottles destroyed, the Masons team decided to rebrand with a subtle and tactile design, emphasising their straightforward approach to gin-making. This included changing their name from Masons Yorkshire Gin to Masons of Yorkshire to honour their roots.

Karl said: “There are a number of multicoloured bottles these days trying to grab your attention, but we wanted to show we’re all about what’s inside.”

Masons recouped the funds to secure new premises and gained a new lease of life over the following years, releasing several experimental and award-winning gins including English Lavender, Pear & Pink Peppercorn and the iconic Masons Tea Edition. Karl said: “Our original gins are relatively spicy, so we wanted to make an exceptionally dry gin that reminds you of the taste of black tea leaves in your mouth, hence the Tea Edition.”

The revived business was ready to take 2020 by storm, and although the Covid-19 outbreak changed the plans of every distiller, Masons was prepared for the unexpected. Karl explained: “We were so used to adapting to the worst possible circumstances that we approached Covid-19 quite calmly.

“The effects on the industry have of course been a huge setback, but we’ve made the most of what we have without delay.”

Masons got straight to work on strengthening their digital channels to meet the surge in online demand as on-trade venues closed down. This involved recruiting digital experts, bolstering relationships with online retailers and maintaining effective communication with consumers as government guidance changed.

Karl said: “A big challenge now is every distiller is competing for online sales, but we are all in this together and willing to help each other out as I learned in 2019.”

Brexit has resulted in some of the shipping companies Masons uses being reluctant to take on orders, so they’ve applied the same roll-up-your-sleeves attitude. Karl explained: “There’s a lot of red tape now that many transport companies are still trying to make sense of, so we’ve had to be on the ball and find alternative solutions as quickly as possible.”

Karl is optimistic for the future with his dedicated team and the supportive gin community banding together yet again. And, in keeping with Masons’ no-nonsense outlook, he has a simple ambition for 2021.

He concluded: “Since the day we launched we’ve never focused on sales targets or number crunching. Instead, we’ve always wanted a big brown sign on the A1 that runs right alongside our premises reading ‘Masons’ Distillery’. When that happens, I think we will have made it.” 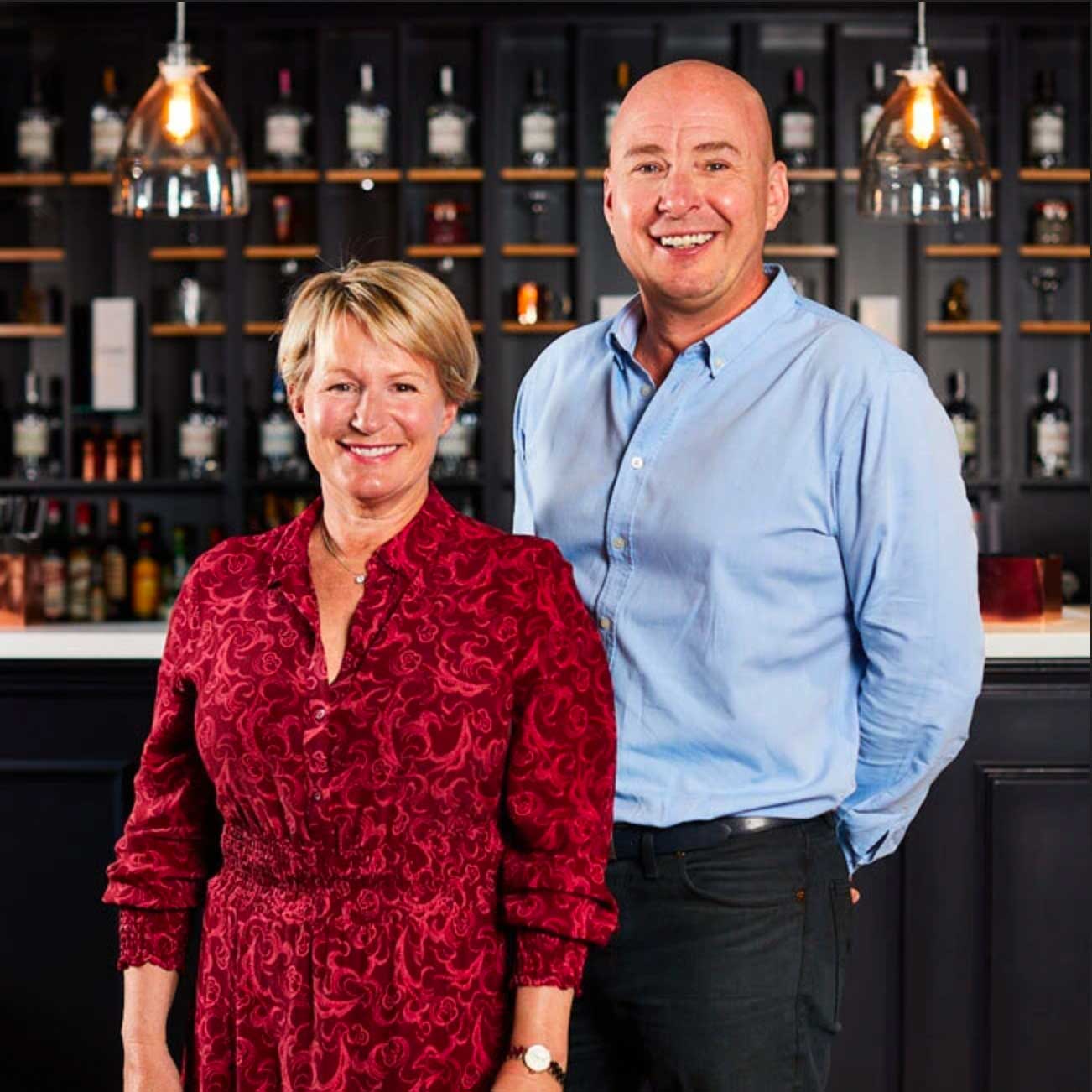 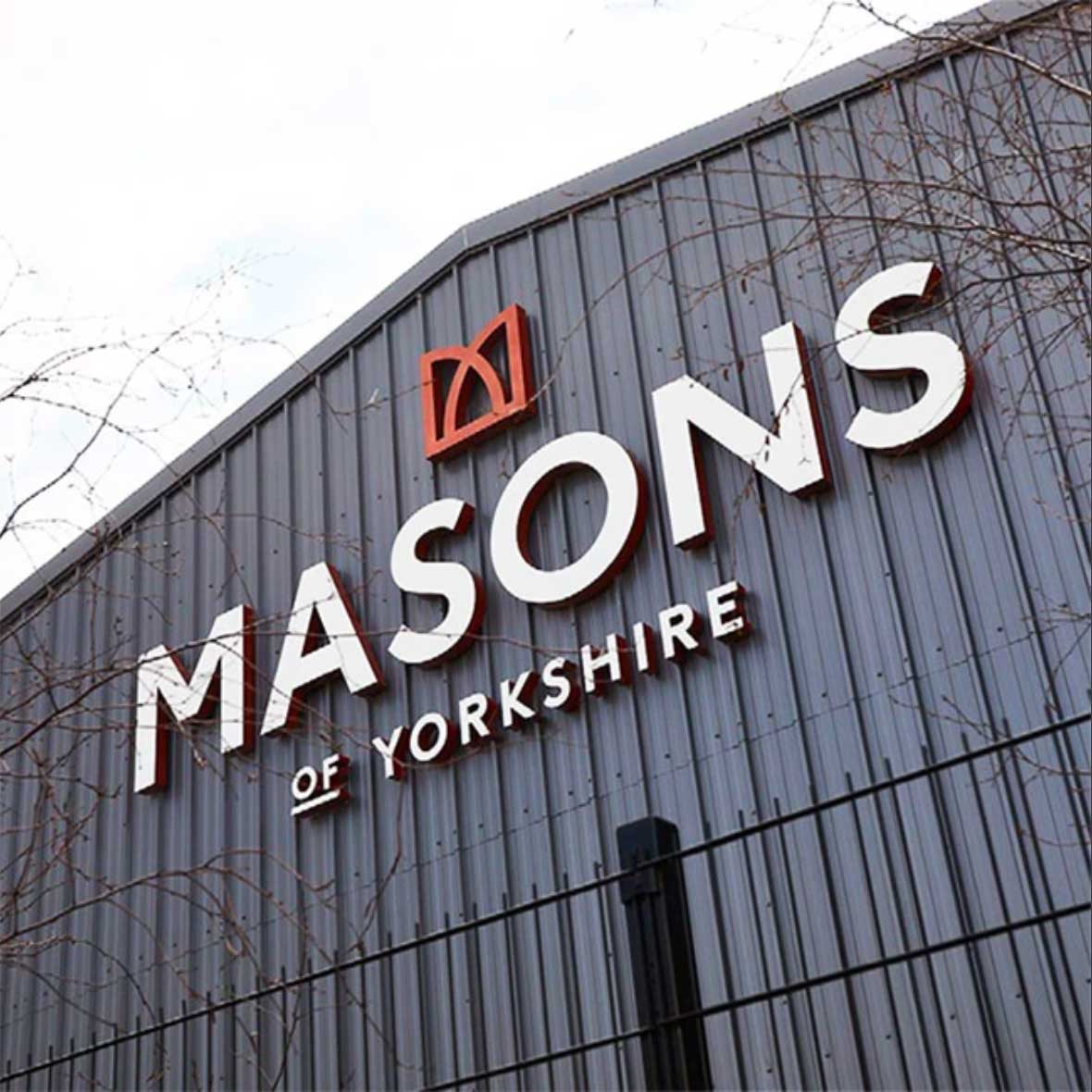 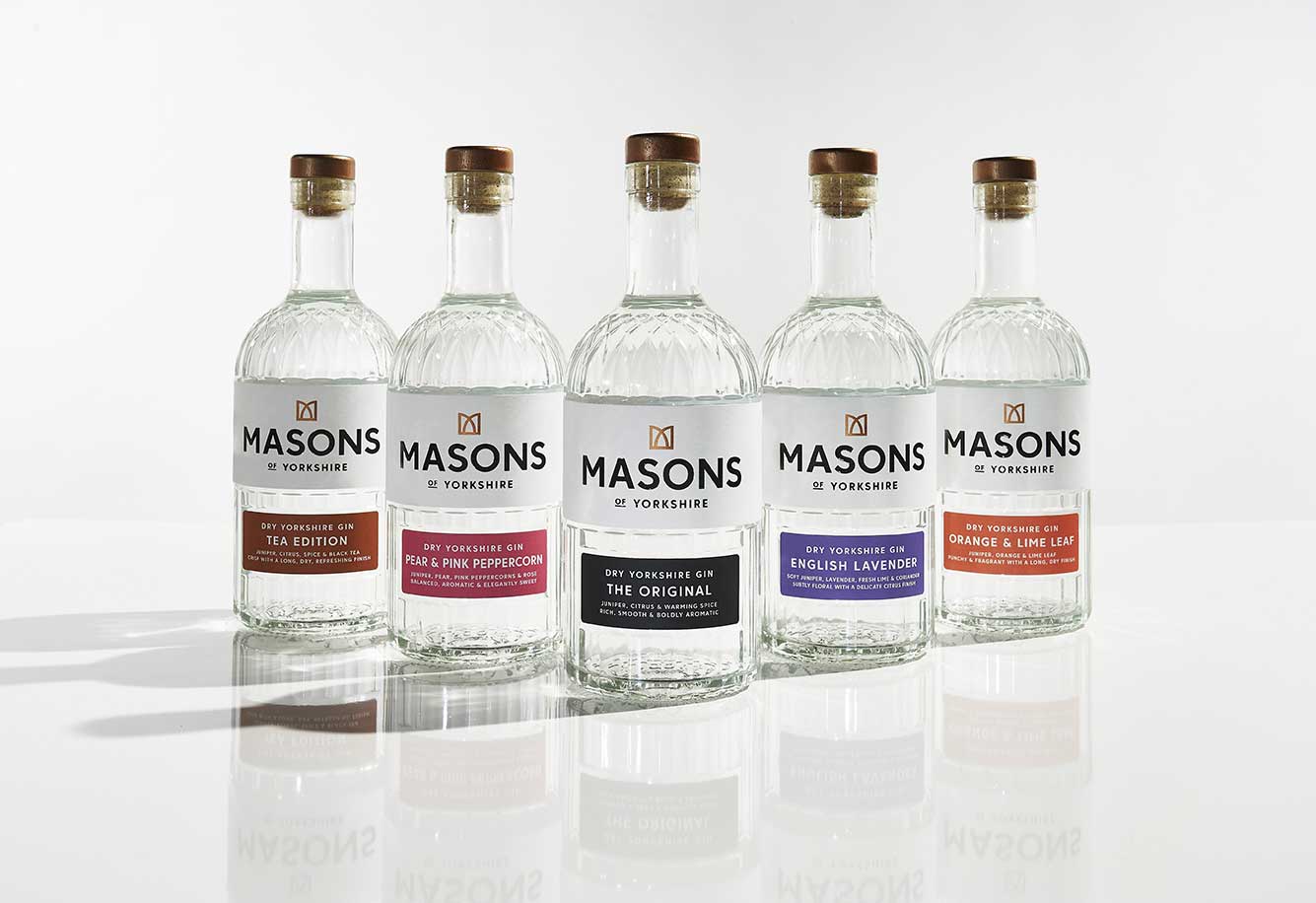 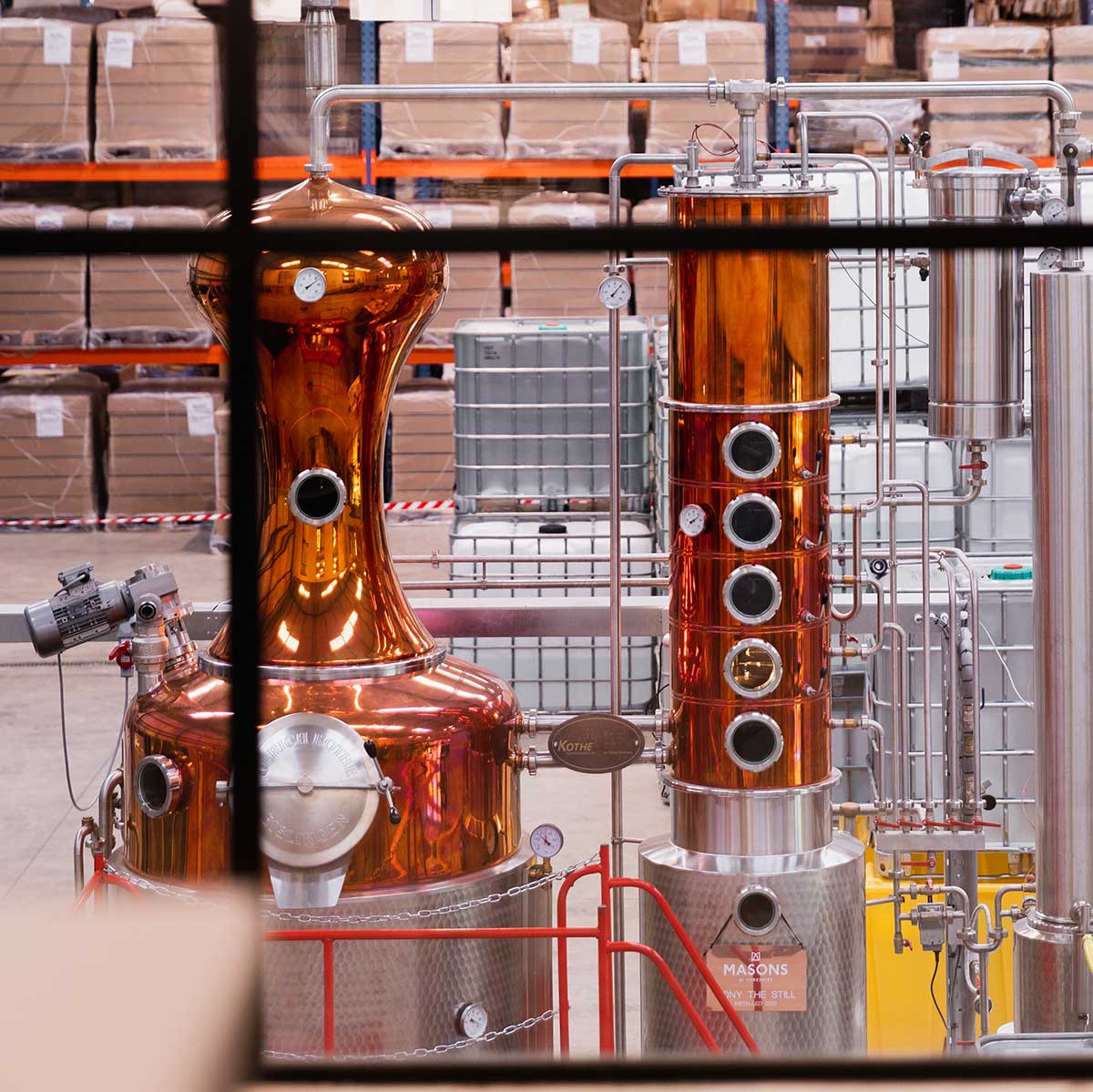 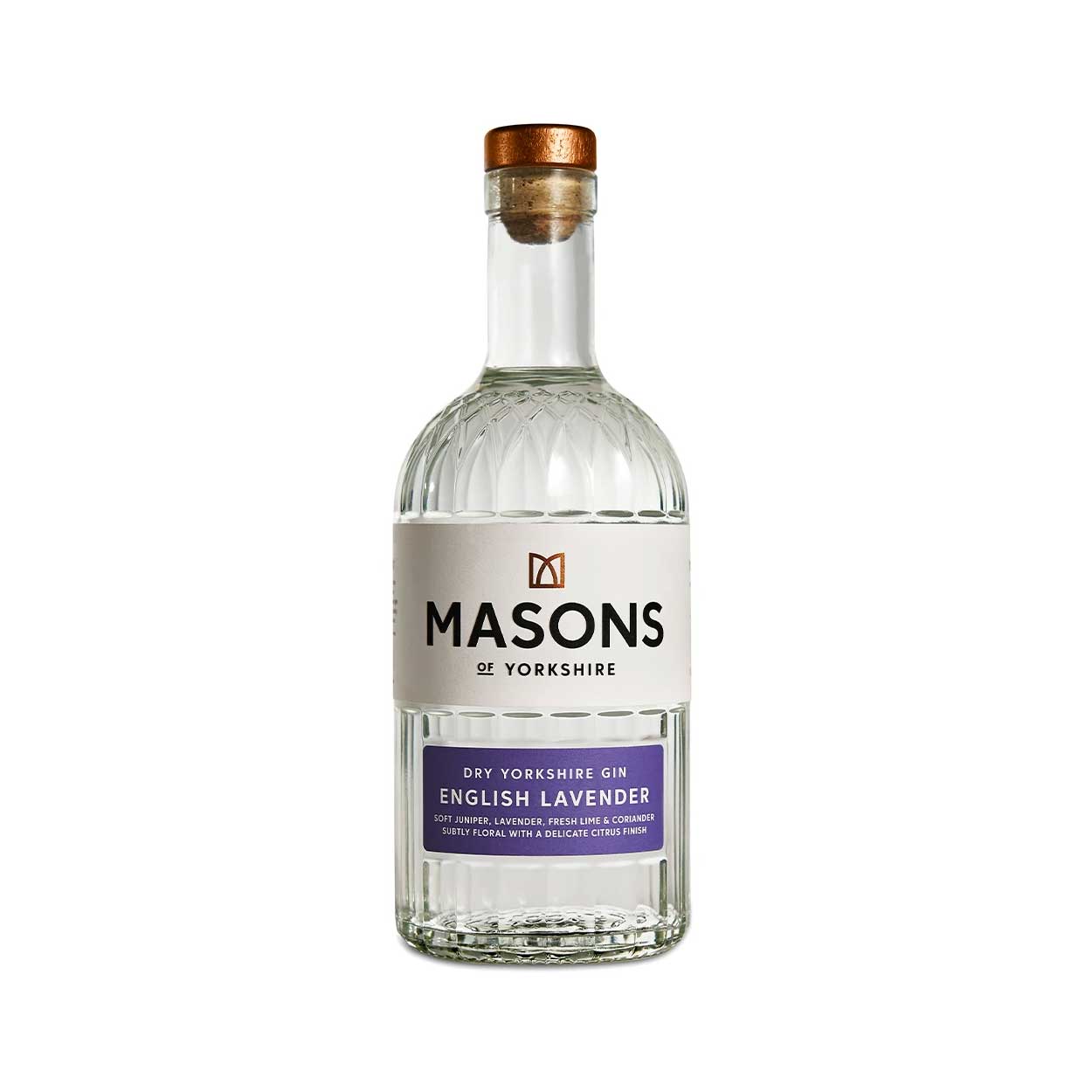 Dry lavender notes upon the nose, creating a rather soft and subtle experience, followed by a slight fennel aroma. Soft texture once onto the palate, with a fresh candied lavender sweet flavour dominating. Rather subtle across the senses, with anise… 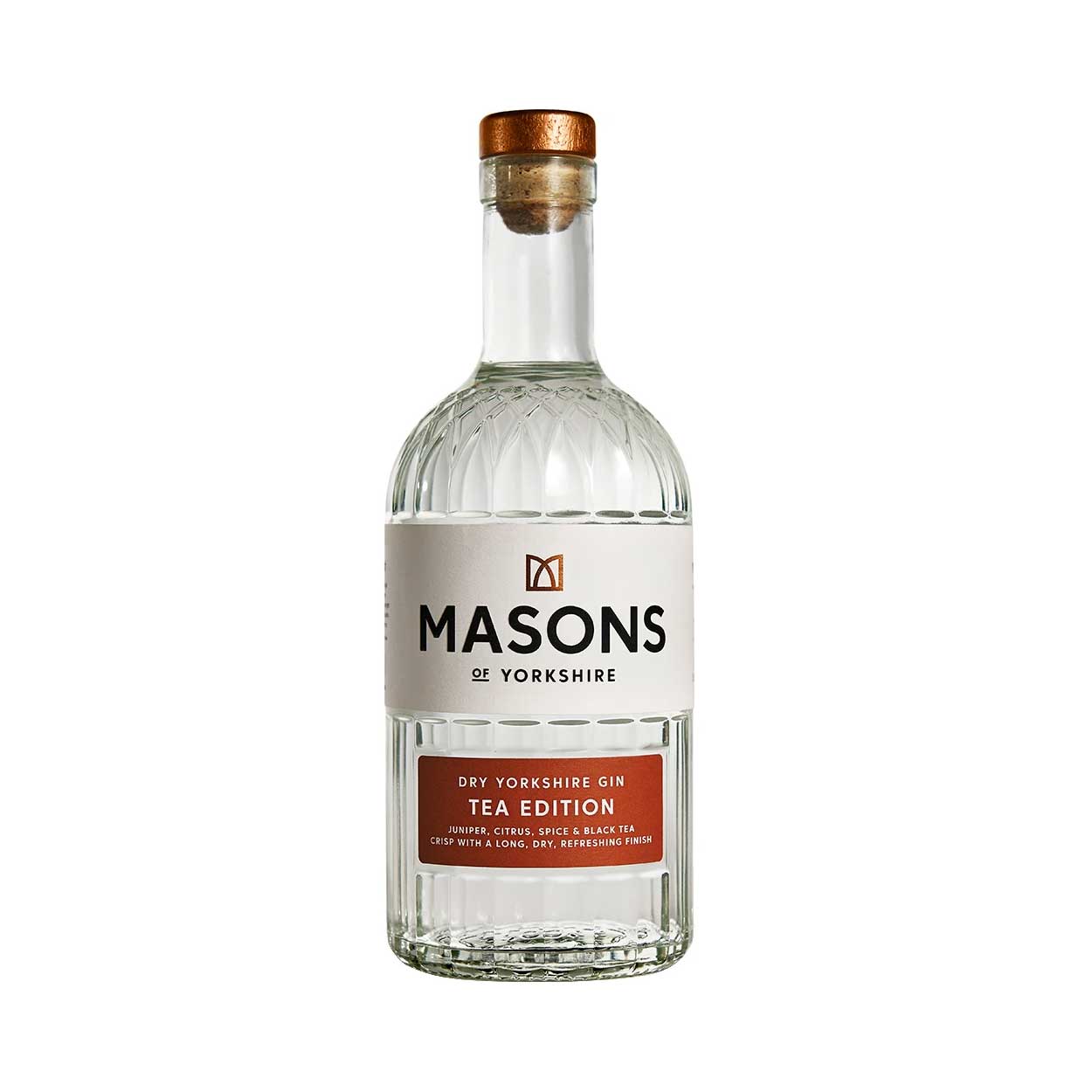 Dry notes of Yorkshire tea are present on the nose, with fresh, light hits as the aromas swirl around. Delicate and fresh upon the palate, with a slight citrus sharpness hitting the senses. Plenty of dry Yorkshire tea notes blast… 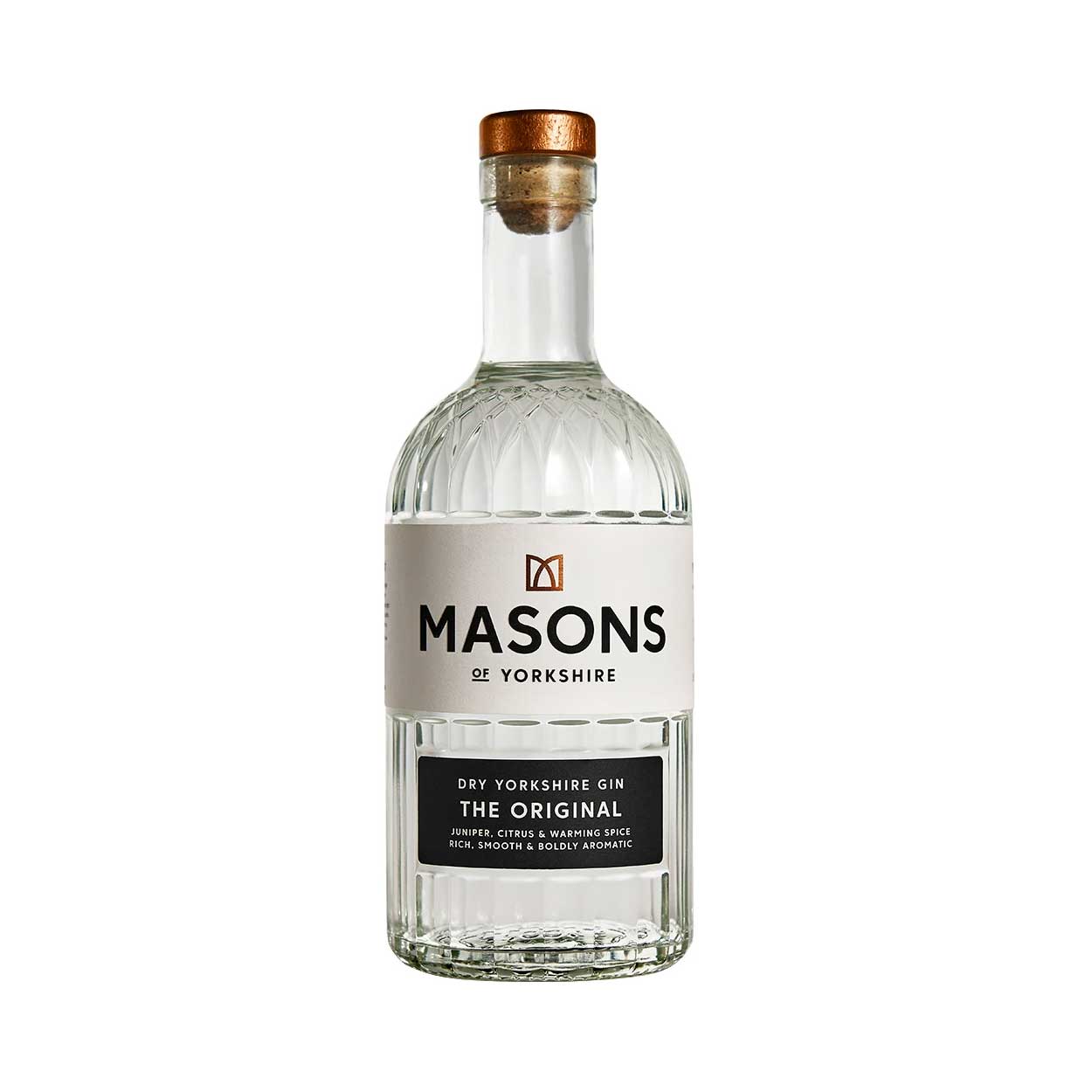 Light fennel upon the nose with fresh, damp grass notes mixed with soft juniper, lime and orange rind, leading to a subtle pepper finish. On the palate, a ripe aniseed start, becoming sweet with fresh, bold citrus flavours including deep… 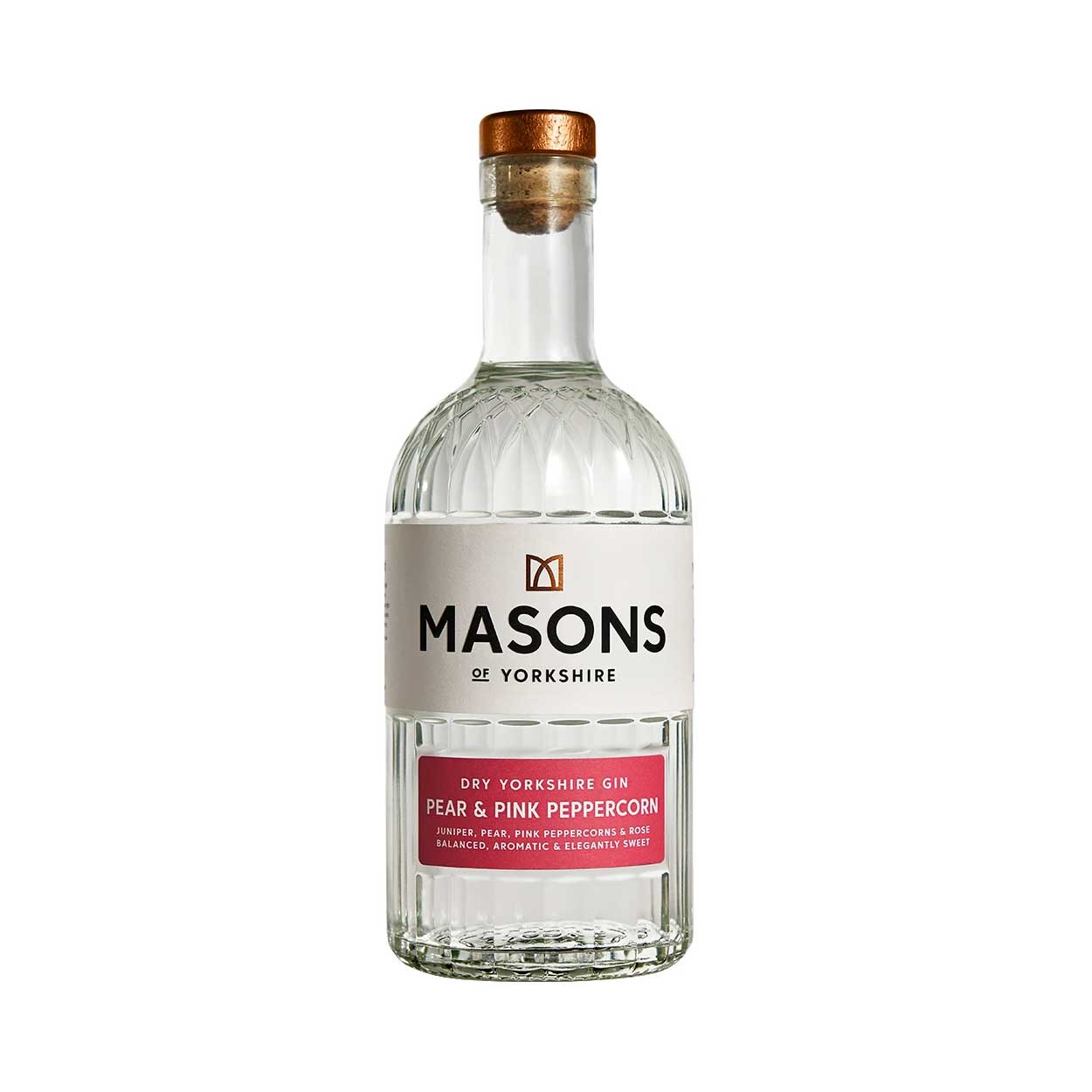 Light fennel upon the nose with fresh, damp grass notes mixed with soft juniper, lime and orange rind, leading to a subtle pepper finish. On the palate, a ripe aniseed start, becoming sweet with fresh, bold citrus flavours including deep…

With its traditional distillation method, the right balance of juniper, citrus elements and secret botanicals the team at Masons have finally created a distinctly unique gin they are proud to call Masons of Yorkshire Gin. Having a real passion for…