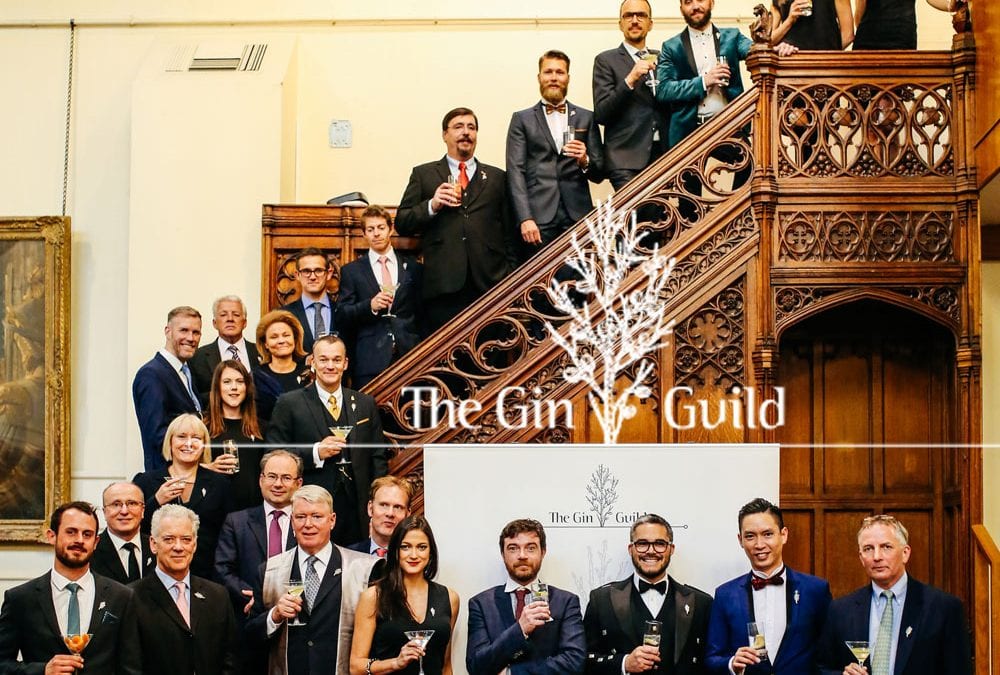 At a ceremony on 9 May 2017, 27 new members were installed by The Gin Guild’s Grand Rectifier Martin Riley into the Gin Guild. They each swore an oath, while symbolically holding juniper berries, to protect the spirit’s quality and production around the world.

A Canadian distiller was one of 27 new Gin Guild members installed at a ceremony at the Guildhall in London this week.

Thomas Steinhart, from Steinhart Distillery in Nova Scotia was installed with the rank of Warden Rectifier (the first Canadian distiller to do so), alongside representatives of brands made in Sweden, Scotland, Guernsey, the Isle of Wight, Cambridgeshire, Surrey and Birmingham.

Charles Rolls, co-founder of premium mixer brand Fever-Tree, which has for many commentators in large measure underpinned the explosive growth in gin sales, was amongst others who were installed in the Guild in the rank of Rectifier.

Industry body The Gin Guild, established five years ago, has its historical roots in the Worshipful Company of Distillers dating back to 1638.

The Guild also held its first non-UK installation ceremony last month in the USA at the Gin Summit. It has grown to a membership of 225.

New members were installed in the presence of the Guild’s Grand Rectifier Martin Riley, Board Chairman Christopher Hayman (whose family have been involved in gin distilling since 1863), and Guild Director General, Nicholas Cook.

New members swore the Guild oath, promising to protect the spirit’s quality and production around the world, while symbolically holding juniper berries (the key botanical in gin).

Martin Riley said: “Gin is a wonderful example of how skills are being developed and employed in the craft of distilling. Innovation and experimentation from a new generation of distillers complements the established skills and experience of those distillers who have been producing exceptional gins for many years.

“This combination of experience, expertise and energy is working together to create a remarkable range of gins which is stimulating unprecedented consumer interest.”

Guest speaker, journalist and author Alice Lascelles, the IWSC Spirits Communicator of the Year, highlighted record numbers of distillery openings and gin brand launches, as well as rocketing sales, and said: “Gin has created a sense of curiosity and excitement, giving spirits a human face.”

The aim of The Gin Guild is to bring together gin distillers and industry leaders to jointly promote and encourage a commitment to excellence in gin distillation and industry custodianship of the spirit.

Sumaiyah Connolly (Chivas Brothers) and Joanna Segesser (Diageo) were installed as Founder-nominated Rectifiers. Timothy Ching from Hong Kong, the Beefeater MIXLDN 6 Global Champion, whose winning cocktail beat competitors from 33 countries, and Jamie Jones, who won the global Gin Connoisseur Program in 2013 and who currently works as global bar executive for The Social Company were also installed as Rectifiers.

Appointed in their own right as Rectifiers were Patrick Braun, Founder of the gin bar ilBar @ilBoccone in Constance; Bjoern Hollmuller, Brand Ambassador for Wild Alps gin; Kate Meehan of gin tour company Shake Rattle and Stir; Charles Rolls co-founder of Fever-Tree, and Professor Katherine Smart, Chief Brewer of ABInBev and President of the Institute of Brewing and Distilling.

A presentation was made to Gin Guild founder Chris Parker, of London and Scottish International, who is stepping down from the Guild’s board.

Membership of the Guild is open to a range of gin industry players with various classes from; Warden Rectifiers, who include distillers, producers and brand owners; and Rectifiers, who have roles in the production, distribution and marketing of gin, including leading bartenders, journalists, marketing experts and educators.

About The Gin Guild

Membership is open to a range of gin industry players. The classes of membership are as follows:

Applications for membership of the Guild should be addressed to the Guild Director General, Nicholas Cook.  For more information, please call 020 3397 2737 or email nicholas.cook@theginguild.com

The installations of the Grand Rectifier, Wardens and other members of the Guild are by way of solemn ceremonies, reflecting the traditions of the trade guilds of the City of London. Guild members receive a certificate of admission to the Guild, a silver Guild “juniper sprig” insignia and a commemorative Guild plaque.

The Guild arranges, co-hosts and/or facilitates access for Guild members to a programme of gin related events and celebrations. Full details are available on request, but will include Guild installation ceremonies (including an option for full members of Guild installation at the prestigious venue of the Mansion House, London, followed by the Worshipful Company of Distillers Banquet in the famous Egyptian Hall).

As at May 2017, Guild membership stands at 225, with the members representing, through their respective companies, thousands involved in the gin industry.